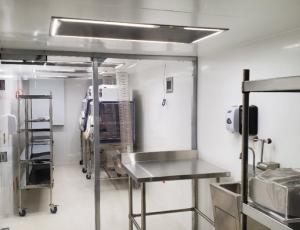 While all three chapters address cleanrooms, USP <795> is the first (of two) to have its revisions made public and, accordingly, provides facility owners with the first opportunity to provide public comment or seek clarification. Section four of the Proposed Revision to GC <795>, which covers Buildings and Facilities, states:

As written, this section is currently subject to some interpretation, as the USP provides no clear definition of what constitutes a “designated space,” only that such an area must be “separated.” In the absence of any additional description, it’s possible that a counter in the corner of a pharmacy could satisfy this criteria — but not necessarily. It’s also possible that this revision mandates a separate cleanroom dedicated solely to nonsterile compounding.

In fact, in order to maintain the required “separation,” the new language indicates a clear possibility that certain facilities could be compelled to have four separate cleanrooms, for:

Whether one separate cleanroom is needed, or multiples, this could necessitate new (and expensive) construction.

As USP <795> must now align with USP <800> — and the latter chapter requires that designated areas must be available for receipt and unpacking, sterile hazardous drug (HD) compounding, nonsterile HD compounding and storage of HDs — it means that sterile and nonsterile HDs must be compounded within a containment primary engineering control (C-PEC, a ventilation device that minimizes worker and environmental exposure when handling HDs), in turn located in a containment secondary engineering control (C-SEC). Additional to being “physically separated,” any C-SEC/cleanroom used for compounding of nonsterile HDs must:

Sections four and five of USP <795> list out similar requirements for cleaning, temperature, and humidity controls. Specific to cleaning, for example, there have been updates to the previous language in <795>, which stated that the “areas used for compounding shall be maintained in clean, orderly, and sanitary conditions, and shall be maintained in a good state of repair.” Corresponding language in the Proposed Revision to GC <795> now states:

The surfaces of ceilings, walls, floors, fixtures, shelving, counters, and cabinets in a compounding area must be cleanable and must be kept clean. Carpet is not allowed in the compounding area. Surfaces should be resistant to damage by cleaning and sanitizing agents.

The specificity of this updated language could signal a requirement for at least some renovations to a cleanroom, as well as a potential need for different “cleaning and sanitizing agents” (or different surfaces) to ensure compatibility between the two. It also indicates a likely need for the addition of new procedural tasks, including training and staff time for the increased frequency of actual cleanings.

Other changes of note

Outside of the requirements that specifically impact cleanrooms, the Proposed Revision to GC <795> outlines several other, fairly wide-ranging, changes, which could have additional repercussions for facilities owners/managers.

In one such example, section one states that the “compounding facility must designate one or more individuals (i.e., the designated person) to be responsible and accountable for the performance and operation of the facility and personnel in the preparation of compounded nonsterile preparations (CNSPs).” This new requirement could represent a significant demand on facilities to provide a staffer who is uniquely responsible for training on cleanroom use and other elements nonsterile compounding, assuring competencies are done, record keeping and conducting observational studies, among other duties. For smaller facilities, this could necessitate hiring new personnel or bringing in a third party for training, both of which would weigh considerably on that operation’s budget.

Another example comes in the form of new guidance for the beyond-use date (BUD), which is required to state the date beyond which the preparation cannot be used and must be discarded. A big change is found in section 10.3 (Table 3) of GC <795>, which states that: “Nonaqueous dosage forms,” stored at “Controlled room temperature,” will have a BUD of 90 days.

Compare this to the old version of <795>, which stated that: “For Nonaqueous Formulations — The BUD is not later than the time remaining until the earliest expiration date of any API or 6 months.” Based on this language, the USP has effectively reduced the BUD by half for nonaqueous solutions. As such, the requirement would necessitate changes to inventory management and could cause additional waste.

Given the possible requirement for new staff, financial investment and procedural overhaul, facilities with cleanrooms are faced with the responsibility to assess their operations to determine what compliance issues might arise if USP <795> is implemented as currently written.

By getting Aseptic Enclosures involved in the cleanroom design early, we can save facilities a tremendous amount of professional fees, overall project cost and long-term operational costs, so do not hesitate to give us a call 800.418.9289